Nirmala Menon. Photo: Special Arrangement
Nirmala Menon has helped corporate India work towards a policy of inclusion at the workplace
As a child, she loved to dance but didn't feel she was “pretty enough” to be a dancer. Today, as one of the pioneers of diversity management and inclusion solutions in corporate India, Nirmala Menon looks back at instances like these that have shaped her ability to connect and understand the tyranny of prejudices and their impact on people.
“We often don't take social conditioning seriously but it has a long-lasting impact,” says Nirmala, who works with organisations to help them create an inclusive and enabling environment for their diverse employees. “The challenges of an increasingly diverse workforce cannot be ignored. People want to feel valued everywhere and in return promise you commitment. If not, you will have employees who will come in and do just enough to get by, helping neither themselves nor their organisations,” adds Nirmala who applies the same rule in her personal and work life.
No one is blind to differences and certain personal attributes can automatically pull up socialised stereotypes, which then reflect in small, ordinary gestures, comments and behaviours that could make a person feel excluded or inadequate. At a cumulative level such instances can corrode any environment. “People carry these slights within them and it shows up in their work interpersonal relations and productivity,” she says.
Having spent 25 years in the Human Resources field, she knows that hiring people is easy – the money, the brand name and good policies can do the trick, but a long-term relationship solicits a truly inclusive work culture.
Nirmala today helps organisations and employees break free of self-imposed social shackles, to understand their responsibilities in ensuring a fair, safe and inclusive workplace, where all employees have equal access to growth and opportunity. “The era of nurturing only a ‘certain kind' of people is not sustainable anymore. The war for talent is intense and unless organisations are welcoming of and sensitive to the needs of a diverse workforce, its quest to attract and harness the right talent will not be successful,” she tells us.
Breaking free of social conditioning is something Nirmala has done most of her adult life. Coming from a typical traditional south Indian family, she was the first girl in her family who stepped out of home to study at the prestigious XLRI School of Business and Human Resources, Jamshedpur. She went on from there to complete her masters from Temple University in Philadelphia — a decision she and her family had to defend when everyone her age was expected to get married and settle down.
It was at Temple University, where she first heard of ‘diversity', when a professor at the University invited her to be a part of his team working on ‘inclusion'. Her cultural background, gender and immigrant experience were interesting aspects that helped her gain a first-hand understanding of the value of diversity and inclusiveness. Later, as a part of India's growing IT corporate workforce at IBM, Nirmala had the chance to learn the tenets of diversity and inclusion.And all this was after she had taken a break to start a family. She values this experience tremendously, as the learning garnered helped her address the needs of the increasing number of women and returning mothers. Nirmala helps organisations become more inclusive and “enabling” for women. Men benefit just as much from these family friendly policies, she claims. “In fact, if we can encourage our men to participate and contribute more at their homes, it will free up some of the ‘socialised' pressures women feel in pursuing their careers. To get more women at work, we need more men to do more at home!”
From the business point of view, initiatives in diversity and inclusion are not going to be a choice but necessary and key differentiators. And why not, for 10 years ago, most organisations thought it was impossible for anyone to work from home — today, is it becoming a norm for organisations to offer flexibility. Change in corporate India is certainly here to stay and women like Nirmala are charting out new roads every day.
Posted by Kim at 1/28/2011 01:19:00 PM No comments: Links to this post

While not strictly about XLRI, this article by Schumpeter in The Economist , is a wonderful essay on the town of Jamshedpur/Tatanagar. 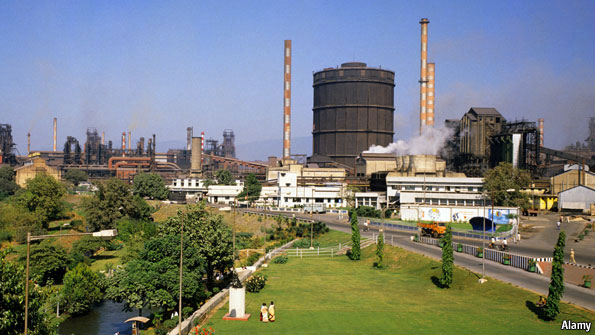 COMPANY towns used to be common in the West. The Cadburys and Rowntrees built them in England, as did William Hesketh Lever, founder of what is now Unilever. At one point the United States had more than 3,000 of them. They were particularly popular in the South and West, and in the mining and lumber industries. But they have long since disappeared, destroyed by the motorcar, the cult of corporate focus, and the general maturing of the economy.

As so often, what is dying in the West is surviving or being reborn in the emerging world. New company towns are being constructed from nothing, most notably in China. And old ones are being given a new lease of life. But even with all this new activity Jamshedpur, the corporate headquarters of Tata Steel and home of its biggest steel plant, continues to lead the pack. 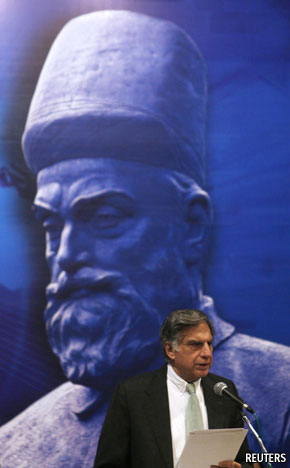 Jamshedpur was created at the turn of the past century to solve a practical problem: the resources needed to make steel, in the form of coal, iron ore and running water, were stuck in the middle of an isolated forest. But practicality was also infused with idealism: Jamsetji Tata, the founder of both the town and of what became the Tata Group (pictured here with his great-grandson Ratan Tata, the group's modern-day boss), wanted to create an industrial jewel, with wide avenues, good schools and generous sports facilities, to prove that India was capable of economic independence.

Of late the town has become more ambitious still. Tata Steel has become a global force, gobbling up, among others, Britain's Corus. But the company has modernised and expanded, rather than qualified and limited, its relationship with the town and its surrounding region. Again, practical and idealistic considerations are reinforcing each other. The state administration is incompetent. The Naxalite rebellion is a growing threat (I travelled 30 miles into the countryside and saw plenty of signs of soldiers camped out to deal with insurgents). The Western doctrine of "corporate social responsibility" (CSR) has also given the founder's very Victorian vision a new lease of life.

"We also make steel"The result is odd, to Western eyes. Tata Steel runs a 900-bed hospital, and provides its workers with accommodation ("I have a company house and a company car," says one manager, "all I had to bring was a wife.") Jusco, a Tata Steel subsidiary, provides the town with its utilities, and keeps it clean and well-ordered. The company employs 250 people who are responsible for rural outreach. They teach tribespeople how to grow crops, give advice on HIV, help create irrigation systems, and generally act as mentors to the rural population. They also provide all sorts of social services to poor city dwellers. Tata Steel pays for a huge sports centre, which is open to all, in the shadow of the steel mill. It also runs several sports academies, for archery, athletics, cricket and, above all, football, which train people from all over the country. The football academy has trained 142 people who have played for their country in various capacities, and has frequently formed a tie-up with Sheffield United, which is a much admired team in these parts (from England's most famous steel town). Tata also owns the local newspaper and even runs the town's zoo.

Far from apologising for all these activities, Tata is so proud of them that it uses the phrase "we also make steel" in its advertisements. There are clearly good commercial arguments for some of these activities. The company has to step in to fill institutional voids left by the market (which is underdeveloped in such an isolated spot) and the government (which is ineffective). Creating national sports stars from scratch is arguably even better for your brand than sticking it on the shirts of established stars. Tata Steel has not had a strike since the 1920s, and has so far escaped the wrath of the Naxalites. But there is surely a question of where good strategy stops and where sprawl begins. Does Tata Steel know when to say no? Or will it be constantly pulled into new CSR activities that will divert too many resources from its core mission?
Posted by Kim at 1/28/2011 01:50:00 AM No comments: Links to this post

Email ThisBlogThis!Share to TwitterShare to FacebookShare to Pinterest
Labels: Jamshedpur


The result of XAT 2011 has been declared by XLRI Jamshedpur, the B School that conducts one of the toughest MBA entrance exams in India on January 25, 2011. The XAT 2011 takers can view their results by clicking on the following link:
http://184.73.49.226/XATRESULTS/
Though the declaration of results was scheduled on January 31, 2011, it has been done prior to the schedule.
The exam was held on Sunday, January 2, 2011. The difficulty level of the exam was considered to be quite tough by the test takers and the experts.
The B schools which consider the XAT scores are XLRI Jamshedpur, XIM Bhubaneswar, XIME Bangalore, GIM Goa, LIBA Chennai, SPJIMR Mumbai and several other B schools in India.
Posted by Kim at 1/27/2011 02:42:00 PM No comments: Links to this post

Email ThisBlogThis!Share to TwitterShare to FacebookShare to Pinterest
Labels: XAT

After the success of its previous two national conferences related to the social sector, the top B-school is hoping for a hat-trick with its third, to be held from January 28 to 30. The theme this year is Youth Development and Social Entrepreneurship.
The three-day event will bring around 20 prominent experts on a common platform. Padmashree and Magsasay award winner Deep Joshi will give the inaugural address.

“The conference aims to provide a common space to development sector professionals. There will be discussion on what could be improved in various types of social sectors. This year, the conference will focus on the involvement of youth in the social sector,” said Madhukar Shukla, event co-ordinator.
The conference will have three broad categories — challenges, opportunities and getting started — with diverse topics such as involving youths to volunteer, creating markets for marginal producers, promoting livelihood and employment, leveraging technology for social development, options for funding and investments and supporting the eco-system for social entrepreneurs, among others.
“Each session will be addressed by three or four practising social entrepreneurs and development professionals. The participants will also be able to interact with the speakers in a free-wheeling interface,” said Shukla.
The event is open to all. Corporate organisations, NGOs and students will have to pay a registration fee of Rs 8,000, Rs 4,000 and Rs 800, respectively.
Those who want to attend the event can also log in at seconference@xlri.ac.in
Posted by Kim at 1/16/2011 03:41:00 AM No comments: Links to this post